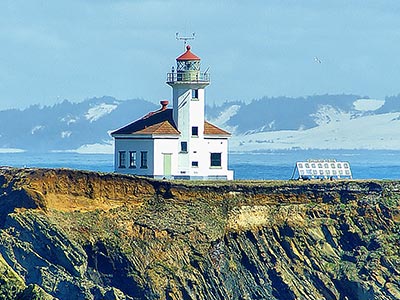 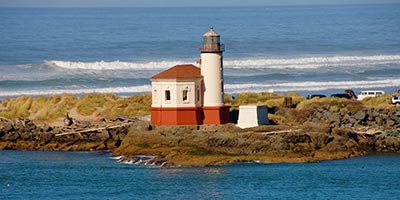 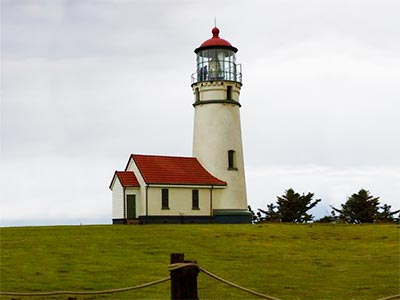 THE BRIGHT SPOT ON THE COAST

Visitors to Oregon’s Adventure Coast come for many reasons. Getting a chance to experience coastal life is one of the main reasons. And what could be more representative than the marriage of land and sea than Oregon’s lighthouses? Both romantic and mysterious, lighthouses have been the backdrop of songs, stories, and dreams. For millennia, these guideposts have helped sailors navigate rugged coastal terrain.

A whopping five of Oregon’s nine lighthouses are within one hour of the Coos Bay, North Bend, Charleston area.

Cape Arago Lighthouse
12 miles southwest of North Bend in Charleston
This 44-foot-high tower was first illuminated in 1934. Earlier structures were built on this site in 1866 and 1908.

Coquille River Lighthouse Interpretive Center
Two miles north of Bandon
Commissioned in 1896 to guide mariners across a dangerous bar, decommissioned in 1939 and then restored in 1979 as an interpretive center.

Umpqua River Lighthouse
Six miles south of Reedsport
The first lighthouse sited on the Oregon Coast and was illuminated in 1894. Its lens emits distinctive red and white flashes.

Heceta Head Lighthouse:
12 miles north of Florence
First illuminated in 1894, its light can be seen 21 miles from land, making it the strongest light on the Oregon Coast.

Cape Blanco Lighthouse:
Nine miles north of Port Orford
The Oregon Coast’s oldest standing lighthouse; on the westernmost point in Oregon; commissioned in 1870. The lighthouse was automated by the Coast Guard in 1980.